Bute or Stieglitz should step up to ‘Super Six’ 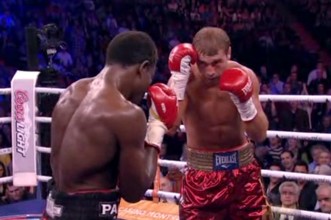 By Tom Graves: The WBC super-middleweight champ Mikkel Kessler pulled out of the Super Six tournament due to an eye injury. The announcement obviously means next month’s fight against Allan Green has been can canceled.

To fit the structure of the tournament, someone must replace Kessler and one name which makes sense for many reasons is Lucian Bute, although he is not as well known as the boxers in the tournament he owns the International Boxing Federation Super Middleweight title and as Kessler’s WBC can’t be up for grabs, it would be best to introduce another title into the tournament to mix things up for the better after this unfortunate event.

Bute Is currently undefeated but is very untested as he has only fought a few top contenders in that division such Sakio Bika and Librado Andrade. Fighting in the super six would be a perfect way to show the world he is worthy of the world title he owns, replacing Kessler means he would fight Allan Green, who (with all respect) isn’t the best of the six fighters, Green is most likely the softest test here and how perfect for Bute?

Another possible choice could Robert Stieglitz, the 29 year old german who is the current WBO supper-middle weight champion. Stieglitz is much less known than Bute and has almost fought completely against domestic opposition in his back yard in Germany.

There are other boxers within the weight class either side of super middle weight (Middleweight and light heavyweight) who could potentially replace Kessler and they may well be more of an attraction to the tournament than Stieglitz & Bute with the likes of Sergio Martinez, Kelly Pavlik, Paul Williams, Chad Dawson, Jean Pascal or Bernard Hopkins.
There are many things to consider in a short space of time so anyone in the divisions below or above is probably unlikely to happen, although it would make for some interested match up’s.

In my opinion Bute or Stieglitz should step up to this excellent opportunity to boost their careers and gain some credibility in a division of tough opposition, some of which are in this tournament, if neither of these current world champions fight Green and join the tournament, I don’t know how they expect to form any sort of legacy when they haven’t fought any of the best out there.
I look forward to finding out who will be replacing Kessler, one question that struck me when I heard a super middle weight boxer is needed to replace Kessler was, what if Calzaghe wasn’t retired!?

« Schaefer says Juan Manuel Marquez will be going after Katsidis next, not Khan

With Kessler now gone from the Super Six tournament, Allan Green is likely too »