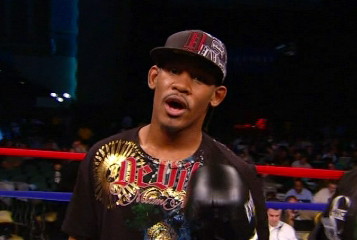 by Ronnie Jordan: The welterweight division is currently regarded by many as the strongest and most talent packed in boxing. It’s hard to argue with this when the division posses not only the two best pound for pound fighters in the world but also a supporting cast of world class boxers like Miguel Cotto, Antonio Margarito, Shane Mosley, and Joshua Clottey. This crop of welterweights may be one of the best group of talent ever to fight at the same weight in the same era.

What its meant for boxing fans is the opportunity to see some incredible fights over the last few years. Barring the Pacquiao/Mayweather fight everyone wants to see there’s been some classic match ups.

Cotto vs. Margarito a controversial fight but a incredible war none the less. Mosley vs Margerito a great fight that shot Mosley back into contention. Clottey vs Cotto, a hard fought marathon that saw both men take unbelievable punishment. Pacqiauo vs. Cotto, a brutal fight outlining Manny as the dominant force at the weight. There’s no doubt whether Manny and Floyd are the two best fighters in the world because they’ve been tested by the best and come out on top. If boxing legacies are to be made there has to be a number of top fighters on your record. Therefore a weight class full of talent is important.

Whats noticeable about every fighter mentioned above is that there all over 30 and approaching the latter years of there career. The division that’s bursting with young talented prospects and in my view will replace the welters as the best, is the middle weight division. Its currently in a healthy state with Kelly Pavlik and Sergio Martinez sitting at the top of the division but looking ahead there’s some superb fighters climbing up the rankings. Starting with Daniel Jacobs, a star in the making with a slick style great power and speed he could be the next Floyd Mayweather.

Then there’s the Canadian born David Lemieux an aggressive and explosive fighter with an impressive KO ratio and starting to prove he’s the real deal against better fighters. Andy Lee a slick south paw from Ireland, trains under Manny Steward. After an unexpected blip against Brian Vera he’s managed to win his last 5 against decent apponants and seems to be improving every fight. Matvey Korobov Russia’s top amateur is very new to the pro ranks but already has Emanuel Steward predicting he’ll be a super star.

Erislandy Lara, a smart stylish technician who is seen by many as the best of the talented Cuban fighters hitting the pro ranks. Gennady Golovkin another top Russian who won everything at amateur level beating the number one super middle weight Lucian Bute along the way.

Along with top fighters like Mathew Macklin, Fernando Guerrero and Darren Barker and the prospect of Light middleweights like Paul Williams, Vanes Martirosyan and Omar Henry moving up in weight there could be some epic encounters over the next few years. Hopefully they will all fulfill there potential and perhaps produce something close to the Sugar Ray Leonard, Marvin Hagler, Tommie Hearns, and Roberto Duran fights of the 80s.

let me know if you disagree with my article. maybe you think the super middle or light welter weights look in better shape. Both I agree are looking good but not as impressive.

« Ross Greenburg Tried to Put the Mayweather/Pacquiao Fight Together

Mayweather- Pacquiao: What if and What Now? »