Is Haye vs. Harrison still a possibility? 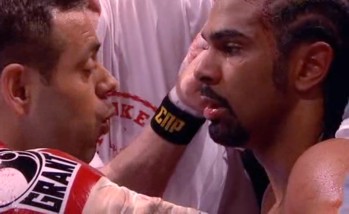 By Sean McDaniel: There are a number of rumors circulating around the internet that WBA heavyweight champion David Haye (24-1, 22 KO’s) will be fighting Audley Harrison next. Indeed, the talk is that fight contract is almost finalized for a bout that will be taking place in November between the two British fighters. If Haye’s proposed mega fight with IBF/WBO heavyweight champion Wladimir Klitschko didn’t go up in smoke recently, I wouldn’t believe the Haye-Harrison rumors.

However, Haye needs an opponent for the end of the year, and none of his top contenders to his WBA title will bring him the big money that Harrison would give him in the UK. Haye, 29, has said that he wants to fight both of the Klitschko brothers and unify all the titles before retiring at 31. However, Haye missed a perfect opportunity to get the first part of the puzzle out of the way when he reportedly declined a 50-50 offer with no options from Wladimir recently.

It’s hard to imagine that Haye will get a better offer in the future if he waits. This is probably the best Haye can hope for in a fight against Wladimir. Unless Haye wants to milk his WBA title first with some easy wins before fighting the Klitschko brothers, he might be making a big mistake by turning away from a big money fight against Wladimir. With Haye’s brittle chin, he could get knocked cold by anyone he faces next and that ruin Haye’s chances of fighting the Klitschko brothers for a big money fight. It would still be possible, but it would require for Haye to change his time line about retiring at 31, and stick around long enough to make boxing fans believe in him again.

« Chavez Jr. could be facing Pavlik on December 4th – News

Marquez vs. Diaz II: Juan Manuel has big fights ahead of him if he wins this »