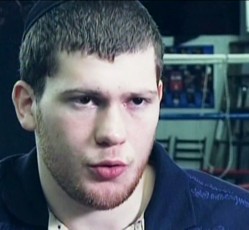 By Eric Thomas: Dmitri Salita (30-1-1, 16 KO’s) wants a rematch with WBA light welterweight champion Amir Khan, who stopped Salita in the 1st round on December 5th in England. Salita, 28, was undefeated at the time that he, with his number #1 ranking in the WBA, stepped up and was viciously smacked down by Khan in one round blowout. Salita was dropped in the opening seconds of the fight and ended up getting knocked down multiple times by Khan.

Salita, 28, appeared much too slow to compete with Khan on that night, and it’s hard to imagine what will have changed since that time. In an interview at Totallyjewish, Salita said “I was in the best shape of my life and although he [Khan] caught me early on, I got up and wasn’t physically hurt. But looking round seeming my friends and family with that crowd made me feel nervous…I know what I’m capable of, will be a better fighter for the experience and would like to fight a rematch with him.”

If Salita wants a rematch with Khan, he’s going to have to get in line and pick up some credible wins to add to his resume. Salita has still yet to beat a top tier fighter during his career and needs to beat at least one or two good fighters in the top 15 if he wants to get ranked high enough to get another title shot against Khan. As of now, Salita is ranked at #12 by the WBA, behind a lot of good contenders. He needs to start targeting those fighters to prove that he’s worthy of another title shot. Salita wants to fight WBO light welterweight champion Timothy Bradley and IBF/WBC champion Devon Alexander in the near future. Those fights could end up being even more one-sided as the Khan fight unless Salita has improved since his defeat to Khan.

« Cintron vs. Williams this Saturday