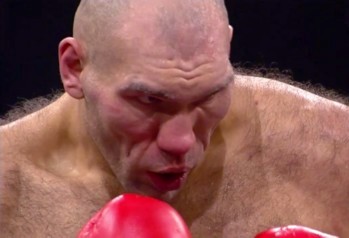 By Eric Thomas: The World Boxing Council has ordered a WBC heavyweight title eliminator bout between number #2 ranked Odlanier Solis (16-0, 12 KO’s) and #3 ranked Nikolay Valuev (50-2, 34 KO’s), according to Fight News. The winner of the fight will be the mandatory challenger for WBC heavyweight champion Vitali Klitschko. Valuev, 36, will likely take the fight with Solis because he wants a future good paying fight with Klitschko. However, Solis, 30, because of his hand speed and power is a really dangerous opponent for the aging Valuev.

Solis is like a heavier, more technical version of David Haye. Although Solis isn’t as mobile as Haye now that Solis has slapped on 60+ pounds of muscle and blubber since turning pro in 2007, he remains one of the most skilled heavyweights in the division. The added weight that Solis has put on hasn’t affected his hand speedy any, as he remains just as fast as he always was. But it has slowed him down in his ability to get around the ring.

However, his power seems to have gotten better and he’s sitting down more on his shots than he used to. Solis won’t likely need to move as much as David Haye did in his fight with Valuev, because Solis’ power and hand speed will be a big problem for Valuev to deal with. The fight could turn out to be an interesting match because the 7-foot Valuev does well against stationary fighters who just stand there and allow him to throw his clubbing shots.

Valuev will have close to a foot height advantage over the 6’1” Solis. However, the weights won’t be as far apart as they usually are for Valuev opponents because Solis will probably come into the fight in the 260s or possible the low2 270s. Valuev would do well if he can take Solis deep into the fight and see if his weight becomes a problem for him. Solis captured a Gold Medal in the 2004 Olympics while fighting at 200 pounds in the heavyweight division.

It’s not easy to recognize him in looking back at those fights, because he was skinny and incredibly fast. Solis has been eating well since he stopped fight in the amateur ranks and put on a lot of weight. At 30, it’s doubtful that Solis ever get back down close to his old amateur weight of 200, and if anything, he could end up getting even bigger if he doesn’t watch what he’s eating.

Solis will probably easily beat Valuev and could end up knocking him out. Unlike Haye, Solis won’t be timid about letting his hands go and will stand and trade with Valuev rather than trying to run like Haye did. Solis’ chin is good, so he won’t need to move as much. If Valuev didn’t want the fight with Vitali so bad, he would be better off avoiding this fight and focusing on his rematch with Haye instead. Solis would be a real problem for Valuev and I can see him beating Valuev much easier than Haye did because of his solid chin and willingness to mix it up.

« Hopkins: “I have no reason to retire”