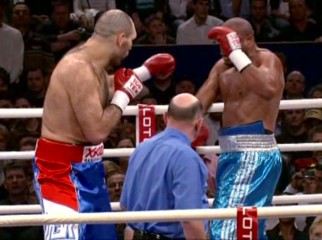 By Erik Schmidt: Former WBA heavyweight champion Nikolay Valuev (50-2, 34 KO’s) is willing to take the fight with World Boxing Council heavyweight champion Vitali Klitschko (39-2, 37 KO’s) for the $2.5 million that he’s offering him, according to German news outlet Bild. Valuev says “Yes, I want to box against Vitali. This is an interesting battle for boxing fans, who have been waiting for it for several years. Last night, I called my manager Don King. The Klitschko side has offered us $2.5 million. We accept this proposal. But we also want money from the TV rights in the U.S. and Russia.”

Klitschko might not be willing to do that. Previously, Klitschko’s manager Bernd Bonte said that the fight between Klitschko and Valuev wasn’t going to happen after Valuev’s team asked for $4 million. Klitschko was looking in the direction of fighting unbeaten #2 ranked WBC contender Odlanier Solis (15-0, 11 KO’s) next instead of the 36-year-old Valuev.

It’s now up to Klitschko and his team to decide whether it’s worth it to give part of the TV rights to Valuev for this fight. Valuev doesn’t have a lot of options besides Haye and Klitschko, but then again Klitschko doesn’t have a lot of other opponents to fight either. He’s looking at a potential big money fight later in 2010 against Haye if he can get by his mandatory title defense against John Ruiz in April, and then following that Klitschko says he wants to retire from boxing.

Fights against Valuev and Haye, both big money fights, would be a perfect way for Klitschko to retire unless another fighter like Lennox Lewis or Mike Tyson come out of retirement and show interest in fighting Klitschko.