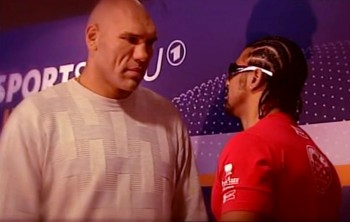 By Alan Dawson: The fanfaronade spat by David Haye, 29, throughout the build-up to his WBA challenge on champion heavyweight Nikolai Valuev, 36, has directly affected the mindset of fans in Haye’s home country.

The perception of Valuev as a gentle-giant outside the ring has the capacity, should he turn from Buddha into warrior on Saturday evening, to surprise Haye and his followers. Haye has the favoured odds in the British isles (4/7 to win), with ducats also being laid on a kayo (2/1), but lest us not forget that the Bermondsey-born boxer has oft been stunned in the past as his style as a low-guarded showman leaves him open to getting rocked.

Haye’s most famous canvas kiss occurred in 2004, against Carl Thompson, when he came out the traps connecting with a flurry of punches in the opening round, but his lack of stamina – and inexperience – proved to be his downfall as the fight was stopped in the fifth. Thompson gained control after the initial dominance from Haye, and a straight right from “the Cat” staggered the Englishman.

Haye has since boxed a dozen more professional fights since the failure at Wembley, becoming the undisputed Cruiserweight king in the process, yet his doubters continue to point to the factors that contributed to his ’04 loss as a reason to shrug off his WBA-shot in Nuremberg.

Haye’s smack-talk – “chopping the Russian tree down” – implies 12 rounds will not be fought. A reliance on punching power will presumably be utilised as opposed to the tactics of smart and swift counter-punching adopted by Valuev’s former opponents Evander Holyfield and Ruslan Chagaev. Should his power-approach fail, Valuev’s under-rated jabs could eventually get the better of a fatigued and burnt-out Haye in the later rounds.

Despite securing a TKO in the 7th over Jean Marc Mormeck in 2007 at the Palais des Sports, the Frenchman caught Haye a couple times throughout the fight. Again, it was a collection of stiff right hands that troubled the Londoner, primarily in the second round after what could be seen as an abandonment of defence on Haye’s part.

Valuev will capitalize on such a reckless approach as “the Russian bear” – depicted in Adam Booth’s gym as a bulbous-eyed goblin – will need no second invitation to clobber his antagonizer’s body/chin/temple [delete as applicable], should Haye leave his left arm hanging.

Giacobbe Fragomeni, a Milanese challenger to Haye’s European Cruiserweight title in 2007, was duly defeated, but caused considerable damage above Haye’s left eye. Claret streamed down Haye’s face and his mouth was bloodied, too. Once again, the guard was low, and he tired in the fourth – testament to his label as a low-stamina fighter. The opening up of his brow perturbed Haye in the seventh, but he showed good heart to turn the fight around.

For Haye to defeat Valuev, footwork, movement, and his power will be key, but if Booth has failed to work on Haye’s ill-discipline when it comes to defence, then Nikolai will have every reason to force Haye into donning a mask of abasement, considering the circus he attempted to ringlead in front of the cameras.