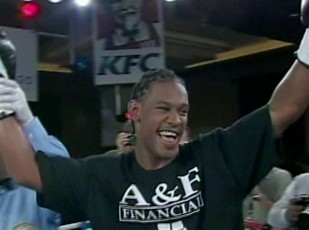 By Jim Dower: Unbeaten middleweight prospect Daniel Jacobs (16-0, 14 KO’s) will be fighting this Friday night on ESPN’s Friday Night Fights at the Desert Diamond Casino, in Tucson, Arizona. Jacobs, 22, will be facing George Walton (20-3, 12 KO’s) in a 10-round scheduled bout. It will be interesting to see if Jacobs has improved since his last fight, a disappointing eight round unanimous decision over light middleweight Michael Walker on May 2nd on the undercard of Ricky Hatton vs. Manny Pacquiao.

The card is packed with other top prospects besides Jacobs, with the undefeated light middleweight Erislandy Lara (6-0, 4 KO’s) and heavyweight Deontay Wilder (5-0, 5 KO’s) fighting in separate bouts. It’s hard to say which is the best of the current prospects because they’re all so good.

Wilder may have the biggest upside because of his incredible power. If he can continue to develop, he may be the next Lennox Lewis. Lara appears to be the most ready of the three, and looks good enough now to compete for and possibly win a world title.

Jacobs still appears to have a ways to go before he’ll be ready to compete for a world title at middleweight. His performance in his last fight against Walker left a lot to be desired despite pretty much shutting Walker out. Jacobs took a lot of big shots in the eight round fight and looked uneasy with the little bit of pressure that was being put on him.

We quickly found out that Jacobs’ power wasn’t as explosive as many people had originally thought, as Walker was the one throwing with the bigger power in the fight, and he’s not a fighter known for being a huge puncher. Jacobs had looked good in his first 15 fights, good enough for some people to see him as a knockout artist with future world title talent.

However, something didn’t seem right about Jacobs’ performances because his competition, which was arguably bad in most of his first 15 bouts, were falling down from shots that didn’t seem all that hard. The punches were thrown with power make no mistake, but they seemed a lot less powerful than other big punchers like James Kirkland, Kelly Pavlik, Arthur Abraham, Joel Julio and Alfredo Angulo.

It took a match-up against Walker to prove what many boxing experts where saying about Jacobs’ power. As it turns out, Jacobs may be more of a Roy Jones Jr. type fighter than a knockout artist, which is actually better for Jacobs because he’ll last a lot longer if he focuses on being a finesse fighter like he was in his bout with Walker than if he tries to take all of his opponents out in the first round.

He gave it a try against Walker in the opening round, but then quickly began to box when he saw that Walker wasn’t going to go down like the others. Jacobs did a fine job staying on the move, jabbing and throwing combinations for the remainder of the fight. It was Walker who turned into the power puncher and stalked Jacobs all fight long nailing him with huge shots from time to time.

Lara, 26, has some of the smoothest moves in boxing, as he’s shown himself to be quite skillful in his first six wins since turning pro in 2008. It seems so effortless for him as if he never breaks a sweat. Part of that is obviously the weak competition Lara has been in with, but the other part is his superb boxing skills which are second to none.

Lara has take out four out of his last five opponents with body shots and uppercuts. He’s not easy to hit because he stays on the outside and is able to pick his opponents off. Being a southpaw makes Lara even more dangerous.

There were rumors on the net that Lara was beating up Ricky Hatton in their sparring sessions before the Pacquiao bout. It’s unclear if this was true, but I wouldn’t be surprised if it were true because Lara has the talent to beat a fighter like Hatton, probably with ease.

Wilder, 23, will be facing Kelsey Arnold in a four round bout. Don’t expect this to last more than a round or two, because Wilder hits too hard and will likely decapitate Arnold before long. If the top amateurs on this card, Wilder is the true knockout artist and the one to watch for exciting one punch knockout fights in the future. At 6’7”, Wilder has the size to be a force in the division in the future.

He’s able to get a lot of leverage on his punches which makes him even more dangerous. However, Wilder is capable of throwing with incredible power even from short range, and will be a hard fighter to beat in the future as he moves up the heavyweight latter.

Wilder needs to develop his jab and left hook to go with his devastating right hand. Once he has those tools in place, Wilder will be hard to beat for anyone in the division. It may take Wilder some time for him to develop those skills, however, because he still seems clumsy, uncoordinated and lost when he tries to throw his jab and left hand.