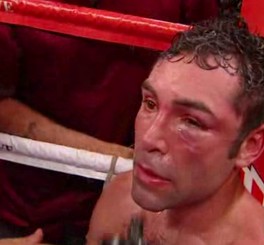 By Jim Dower: According to an article from J. Michael Falgoust in the USA Today, boxing trainer Emanuel Steward feels that Oscar De La Hoya (39-6, 30 KOs) would have won his December 6th, 2008 bout with Manny Pacquiao if Oscar had come into the fight at a weight that was normal to him. Steward pointed out previously that as soon as he heard that De La Hoya didn’t gain any weight after the weigh-in, he knew that Oscar was going to lose the fight.

Indeed, Stewards’ comments have been echoed by many other boxing experts who felt that De La Hoya set himself up to lose the fight by coming in at so low a weight and not putting on weight after the weigh-in. Normally, fighters will get 10-20 pounds away from the weight limit of the bout and then temporarily dehydrate down to make weight.

Immediately after the weigh-in, they’ll rehydrate and have a good meal to put back on the water weight that they lost. In De La Hoya’s case, he didn’t do this. Instead, he cut him down to the 147 pound weight limit by using a strict diet and then stayed that way for the fight.

In hindsight, it seemed like a bizarre thing to do for an experienced fighter like De La Hoya, who had fought professionally for 17 years going into his bout with Pacquiao. It seemed as if De La Hoya over thought the planning stages for the bout, working too hard on trying to make the weight and using the wrong method of taking off the poundage.

The result was that by fight time, De La Hoya was incredibly weak and was only able to fight hard for the 1st round. Pacquiao dominated the next seven rounds, giving De La Hoya a terrible beating and causing him to quit on his stool after the 8th round.

Steward thinks that De La Hoya will make a boxing comeback at some point, giving it a 60% chance according to Falgoust. Although De La Hoya said in his retirement ceremony last Tuesday that he can’t see himself coming back, but with big money bouts out there for him against fighters like Felix Trinidad, Roy Jones Jr. or even against Shane Mosley, it’s hard to imagine De La Hoya not coming back at some point.

Oscar loves the sport of boxing and wants to help it in any way possible, and by fighting one or two bouts against some of his old opponents, De La Hoya would be giving boxing a shot in the arm each time out. Let’s hope that if De La Hoya does come back, he doesn’t resort to any strict diets to make weight like last time out. He’s too good to make the same mistake twice.

« Hatton: One Punch Too Far for Pacman?

News – Pacquiao to Fight Cotto or Chavez Jr. Next »