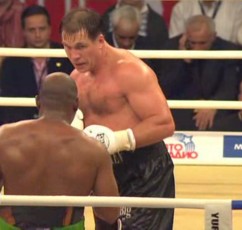 All the action will take place on www.gofightlive.tv beginning at 11am eastern time for a price of just $4.99.

Maskaev, 35-6 with twenty- six knockouts will be making his second start since dropping the crown to Samuel Peter almost exactly one year ago. The native of Sacramento via Kazakhstan is coming off a ten round unanimous decision over the gritty Robert Hawkins back on September 6th.

Boruff, of Kokomo, Indiana is going to try to live the real-life Rocky story as the unknown heavyweight has an impressive record of 17-2-1 with ten knockouts. His only two losses are to former Heavyweight champion Michael Moorer and world-rated heavyweight, JD Chapman.

If Maskaev doesn’t beat Boruff, he is jeopardizing and will lose his mandatory status as per the WBC order dated December 25, 2008. The WBC ordered that the winner of the Vitali Klitschko-Gomez bout must make the next defense of the WBC Heavyweight Championship against Maskaev. The Winner v. Maskaev on terms set forth in the order. The Winner v. Maskaev shall take place within 120 days after the Vitali Klitschko-Gomez bout. Following completion of that bout, the parties of the Winner v. Maskaev bout shall have a period of 30 days for open and free negotiation. Purse offer procedures will ensue if an agreement is not reached with the winning purse offer being spit between the boxers according to the procedure set forth in Sec.5.

Promoter, Dennis Rappaport, said that Oleg is not looking past Boruff, however, it will be a pleasure to once and again have a 100% healthy Maskaev. It has been a pleasure dealing with the hospitable people of a beautiful country, the Republic of Mordovia. If both Maskaev and Vitali Klitschko are victorious in their next fights, it will be the second time they face each other in the ring. When they were both amateur stars, they fought and Maskaev stopped Klitschko in the 1st round. Rappaport said it will be a memorable treat to see history repeat

“To have the former Heavyweight champion of the world in a bout that he needs to win to receive another shot at the title and to be able to show it on gofightlive.tv just shows the type of content we are bringing to the fans.”, said David Klarman, vice-president of www.gofightlive.tv

Standing just 5 feet 1 inches tall, Napa is routinely dwarfed by opponents but the Hackney man overcomes this disadvantage by weaving a tapestry of domination behind the use of masterful footwork, razor-sharp reflexes and a hard-nosed body attack that shocks rivals in its ferocity.

Already a star in London’s vast boxing fraternity, Napa has risen like a phoenix from the ashes of a failed European title bid against Italy’s Simone Maludrottu two years ago to reel off five consecutive title fight victories and become one of the top bantamweights in the world.

After winning and then defending the British title on three occasions, the fistic wizard originally from Zimbabwe chose the perfect moment pull off a career best performance, dropping and defeating reigning European champion Carmelo Ballone to capture the Continental crown last October.

The searing upset earned Napa a top 10 ranking with the WBC along with a top 15 seating in the WBA and IBF standings, heralding the move of the 30 year old onto the world stage.

The East Ender hopes to realize his dream of fighting for a world title in 2009 but standing in the way of that lofty ambition is hardened Frenchman Malik Bouziane, 10-1 (1), with whom Napa, 18-6 (1), tangles with in less than two weeks’ time.

Bouziane, a 31 year old from the south Paris suburb of Massy, won the French bantamweight title in October, 2007 and defended it once before graduating to the WBC Mediterranean championship the next year.

But disaster struck for Bouziane when he was narrowly edged out of the domestic title on points last November by spoiler Mohamed Bouleghcha, who currently holds the European Union bantam belt.

An Olympian for Algeria at the Athens Games in 2004 and Gold Medallist in the 2003 All-Africa Games, Bouziane possesses superb boxing skills but has surprised the Parisian fight community by stating in no uncertain terms that he plans on knocking out Napa in devastating fashion on March 20.

For Napa, the gauntlet has been thrown down and the result can be nothing less than a thrilling contest in what could be his final exam before fighting for world honors.

Tickets, priced at £80 for Ringside and £35 General Admission, are available by logging onto www.frankmaloney.com or by calling the Box Office at 0871 226 1508.

Sky Sports will televise the action live on SS2 at 10PM.

The World Boxing Council declares a day of mourning for the passing away of the mother of WBC Vice President and CIS & Slovenian Boxing Bureau President Edmund Lipinski.

Mr. Lipinski’s fellow-members of the WBC Board of Governors, the entire WBC family, and the Sulaiman family wishes him a prompt resignation to such a deep sorrow, and we stand affectionately by his side.

WBC Safety Committee Chairman Luis Escalona reports that both fighters were under the limit for the 30-day weigh-ins for the April 4 WBC lightweight world championship fight.

Oxnard, CA – While most 18-year olds are anxiously anticipating their prom, young Hugo “The Boss” Centeno Jr. has a bit more on his plate. The high school senior is being prepped and positioned as the next ‘big name’ in boxing. A former Jr. Olympics Champion, Centeno is preparing for his professional boxing debut in both the United States and Mexico.

Under the guidance of his manager, Robert W. Lewis III and his father and trainer, Hugo Centeno, Sr., Centeno has quickly amassed an impressive list of boxing accomplishments. His recent signing to a promotional contract with top boxing promoter, Roy Englebrecht, is perhaps his most impressive to date. Centeno will make his USA professional debut at the “Battle in the Ballroom” at the Irvine Marriott Hotel on Wednesday, April 8 in Irvine, CA. But that is after he makes his Mexico debut first in Mexicali, Mexico under the auspices of the #1 fight promoter Alberto Vega on March 27. These are exciting times for the Oxnard High School senior who still has to prepare for graduation!
Robert Lewis III group photo Hugo Centeno Jr., is a shining example of the importance the gym can play in one’s life. The 18 year old boxer trains at Centeno’s Champion Boxing Gym in Oxnard, CA and is being honed into an outstanding role model amongst his peers. He is a teenage boxing phenomenon. Hugo Centeno Sr. and Robert W. Lewis III are two men who have responded to the needs of Ventura County area youth with the opening of the gym.

A state-of-the-art, 3000 square foot facility, the Centeno’s Champion Boxing Gym offers boxing training to kids at no charge. In an area that has been impacted by the deadly violence of gangs, Centeno’s Boxing Gym is an essential alternative to street life activity. An arena of hope, the gym offers a wholesome environment for not only training, but self development, determination and respect. The emergence of Hugo “The Boss” Centeno Jr. is living proof.

“As a club promoter you don’t very often have the opportunity to sign a great amateur boxer, as they are normally swept up by the big guys” says promoter Englebrecht. “But I feel very blessed to have Hugo under a promotional contract and to launch his pro career, plus to work with his manager Robert Lewis. Hugo has all the tools, both inside and outside the ring, to achieve greatness. A great work ethic, great amateur experience, a great smile, and a great attitude.”

“The feeling is surreal and exciting all at the same time” said Centeno, about signing with Roy Englebrecht Promotions. “I feel blessed because not a lot of people get to say that they are professional athletes. Being part of Roy Englebrecht’s promotions company is a dream come true and the fight fans at Roy’s shows can always expect a great performance from me. I will earn their respect and become the people’s choice.”

Hugo Centeno Sr. has trained his son since the age of seven. Centeno Jr. has since amassed an impressive record of 90 wins and 5 losses, while compiling a list of national championships and titles that comprise a virtual showcase of amateur boxing tournaments, including the Jr. Olympics, the National Silver Gloves, the National PAL tournament and the Diamond Best championship, just to name a few.

“These are exciting times for us. What we are accomplishing with Centeno, Jr. is serving as inspiration to other young kids at the gym,” explains Lewis. “Centeno Jr. is following in some great footsteps. Great fighters like Genaro Hernandez, Mike Anchonda and Sergio Mora also made their debut at Irvine Marriott’s ‘Battle in the Ballroom.’ Centeno Jr. is definitely ‘The Boss,’ and we are all playing to win here!”

Centeno’s Champions Boxing Gym is located at 1162 Industrial Avenue in Oxnard, CA (off Wooley Rd). The gym is funded solely by Robert W. Lewis with donations and receives no government help or assistance but all donations are welcomed. For more information call 805-487-4600.


« Öner on Gomez vs. Klitschko: “We Will See The Best Heavyweight Fight in Years!” – News

Macklin and Elcock Ready for Battle; Fury vs. Swaby, Quigley vs. Dodson – News »