Molina Too Much For Allotey 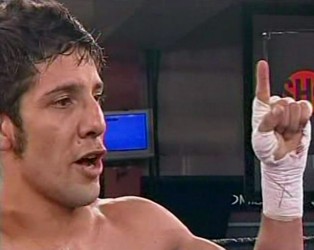 By Jim Dower: Undefeated lightweight prospect John Molina (15-0, 11 KOs) destroyed Kpakpo Allotey (16-7, 14 KOs) in the 3rd round on Friday night at the Tachi Palace Hotel & Casino, in Lemoore, California. Molina, 26, dropped Allotey with a hard left to the body in the 3rd, at which point Allotey rolled around on the canvas in pain and was quickly counted out at 1:28 of the round by referee Dan Stell. At the start of the round, Molina had again landed a hard left to the body, sending Allotey down on the canvas in pain.

However, the referee appeared to miss the call and mistakenly ruled it a low blow rather than what appeared to be a legitimate punch to the solar plexus of Allotey.

Molina looked impressive throughout the fight, stunning Allotey with a powerful right hand in the opening round. Allotey looked powerful himself in the 1st round, finding Molina with hard right hands and some nice jabs. Allotey used a double jab to try and keep Molina on the outside.

However, Molina landed caught up to him and landed a big left uppercut that caused Allotey to back off. Allotey came back with some big right hands later in the round, but Molina came back with a series of hard body shots as the round ended.

Allotey’s right eyelid was cut in the 2nd round. At the start of the round, Allotey fought well and landed some enormous shots. However, he appeared to punch himself out in the opening minute and soon found himself on the receiving end of a huge barrage of punches from Molina.

Allotey stood with his back to the ropes, unable to escape while Molina landed one big shot after another. At the end of the barrage, Allotey emerged with a cut right eyelid. Allotey looking desperate and looking like a cornered animal, fought back with a series of hard right hands that caused Molina to back off from his attack momentarily.

Molina resumed attacking but ran out of time as the bell sounded to end the round.
In the 3rd round, Molina landed a nice left to the midsection of Allotey at the start of the round, sending him crashing to the canvas in pain.

Allotey then spent what seemed like ages rolling around on the canvas at pointing to his groin as the confused looking referee futilely tried to get him to stand up. It seemed strange, because the referee ruled that it wasn’t a low blow which made it bizarre that he was trying to get Allotey to stand up. Usually, the referee stands back and tells the fighter they have five minutes to get up and doesn’t try to persuade them to get up off the canvas immediately the way that his referee was.

The ringside doctor soon joined the referee on the canvas, telling Allotey that it would help him feel better if he got up off the canvas and walked around. Finally, after a little more persuading, they were able to get Allotey to stand up and walk it off. However, he didn’t look particularly interested in resuming the action. However, he did so after about a minute.

As soon as the action resumed, Allotey landed a series of jabs and a some nice body shots. However, Molina went back to what had worked for him before and began attacking Allotey with powerful body shots. Seconds later, Molina put him down for good with a nice left hand to the midsection. Like before, Allotey laid on the canvas in pain except this time he was counted out at 1:28 of the round by referee Dan Stell.