Why There Needs To Be a De La Hoya-Pacquiao2 Bout 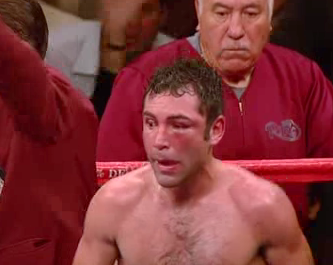 By Manuel Perez: Forget about the results of the first fight, there needs to be rematch between Manny Pacquiao (48-3-2, 36 KOs) and Oscar De La Hoya (39-6, 30 KOs), because the result – an 8th round stoppage – is tainted from the fact that De La Hoya wasn’t at his best from having been weight drained leading up to the fight. Pacquiao can’t claim any victory from that, just as he can’t claim victory from his controversial 12-round split decision win over Juan Manuel Marquez in March.

De La Hoya needs a second chance to avenge his defeat, come in at a more nourished weight for his body and to be able to fight under his old trainer Floyd Mayweather Sr. I frankly don’t care what people say about De La Hoya being shot and that he needs to retire, because they’re dead wrong, all of them. De La Hoya isn’t shot, and he definitely doesn’t need to retire.

What he needs is to be able to come in at a slightly higher catch weight, something like 150 instead of 147. If it’s okay for De La Hoya, the more popular fighter, to have to starve himself down (losing a lot of muscle in the process) down to a weigh much lower than his natural weight, then it’s only fair that Pacquiao be willing to give him a rematch a slightly higher weight so he can accommodate De La Hoya.

Because all I know is that the fighter that Pacquiao beat on December 6th wasn’t De La Hoya, it was a fighter that was badly starved and in need of a good meal. Believe me, if you let Oscar into the rematch at more or less his natural weight and let him have his trainer Mayweather Sr. back alongside him, there’s no way that Pacquiao could beat him for a second time.

The fighter that Pacquiao beat was a sick man, someone that should have been in one of those Jenny Craig hospitals for fat people and not in the boxing ring trying to beat a top athlete. De La Hoya really screwed up when he got talked into fighting the bout at 147 – that was insane for him to do. Instead of trying to take off a ton of lard like he was doing, De La Hoya needed to keep his fat on his body, because he needed the fat reserves for later on in the fight to keep him strong as the fight wore on.

You can’t give away your fat like that. What De La Hoya needed to do is strip of a tiny bit of weight, somewhere along the lines of five pounds and then focus on dehydrating himself a day before the weight like all fighters do to make the 147 pound weight limit.

From a nutritional standpoint, De La Hoya was badly misguided to have taken off all the 20 or so pounds that he took off to make the fight, and he should have questioned the wisdom of his health gurus who assisted him in taking off the weight.

In a way, he seemed to be stressing out, over-thinking the bout, and looking for too much outside assistance to help him. If you don’t know what do after having spent over 25 years in the sport, I don’t what to think. De La Hoya didn’t need the health people, didn’t need the new trainer and certainly didn’t need to starve himself down to make the weight.

If you add all those things together, they come up to the real reason why De La Hoya lost to Pacquiao, and not because he was beaten in the ring. That’s further proof that there needs to be rematch as soon as humanely possible. Pacquiao should forget about fighting Ricky Hatton or Floyd Mayweather and turn his attention to finishing his business with De La Hoya, because he can ill afford to have another fight that leaves a lingering smell of controversy surrounding it.

« Does Holyfield Need To Be Saved From Himself?

Will It Mean Anything If Calzaghe Finishes 50-0? »