Is De La Hoya’s Diet The Cause Of His Loss To Pacquiao? 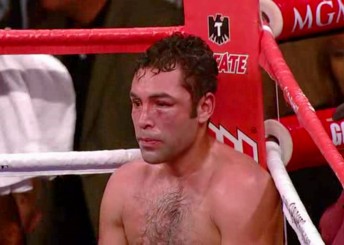 By Manuel Perez: Just what I thought, Oscar De La Hoya’s drastic diet for his December 6th fight with Manny Pacquiao, which included a lot of Kangaroo and Buffalo meat (both low in fat), may have ultimately played a major role in Oscar’s defeat to Pacquiao. De La Hoya (39-6, 30 KOs) quit on his stool after the 8th round against Pacquiao after taking a one-sided pounding in the bout at the MGM Grand, in Las Vegas, Nevada. De La Hoya, 35, looked nothing like his former self, appearing weak, without energy and badly over-trained for the fight.

Normally, a fighter comes in heavier than the weight limit (excluding heavyweights) and then take off the extra weight by dehydrating themselves briefly before the fight in the sauna. In De La Hoya’s case, he took off a massive amount of weight from his normal weight of 160-180, and then stayed at that the artificially lower weight up until the moment of the fight.

However, in his case, Pacquiao had put on weight, all muscle, rather than having to strip off muscle like De La Hoya clearly did. It was this drastic diet, from my perspective, that ultimately caused De La Hoya’s downfall, leaving him with little energy, zero power and affecting every facet of his game, even his ability to get around in the ring.

It’s no wonder then that De La Hoya would be beaten so easily, because when a fighter undergoes dramatic weight loss schemes, it often leaves them terribly weak and lethargic, barely able to fight hard for more than a couple of rounds without tiring out.

For example, Kostya Tszyu’s fight with Ricky Hatton. Tszyu took off a lot of weight for the fight and it appeared to leave him weak and without his normal energy levels that he had in prior fights. As a result, he was beaten by Hatton in the later rounds and stopped in the 11th round.

De La Hoya appeared to have been too worried about making the 147 pound weight class, a weight that he hadn’t fought at in eight long years, and overreacted with his drastic diet to make the weight limit. Instead of eating and training much as he normally does for fights, and then taking off the extra weight with dehydrating, De La Hoya went way overboard with his diet and ended up stripping off a lot of muscle in the process rather than just fat.

Unfortunately, it’s a lesson that De La Hoya will have to live with, because he’s not going to get another shot at Pacquiao now, there’s little chance of that happening. But at least it’s good to know that De La Hoya isn’t a shot fighter and not the person that lost to Pacquiao on December 6th.

« Hatton Has Unfinished Business With Witter and Bradley

Erdei vs. Barashian On January 10th »