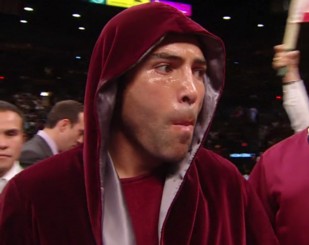 By Manuel Perez: I’m not taking anything away from Oscar De La Hoya for his performance on Saturday night against Manny Pacquiao, he did the best he could given his poor physical condition that he came into the fight on that night. At best, he may have been 40% of his optimal level after starving himself and over-training for the fight to the point where it left him weak, tired and almost entirely useless after only the 2nd round of the fight.

Obviously, he made a fatal miscalculation by taking off so much weight to come down to the 147 pound division weeks before the fight instead of in the final week like most fighters. With all his special diets, trainers and what all, De La Hoya seemed to over-think his situation, literally worrying himself into defeat rather than doing what he had always done for a fight.

First of all, he should have stayed with his long-time trainer Floyd Mayweather Sr. instead of “Nacho” Beristain, who seemed like a poor fit for Oscar from day one. Mayweather would have stopped De La Hoya in his tracks starting with his crazy dieting and told him to eat right, not to starve himself, and would have come up with a perfect plan to beat Pacquiao.

De La Hoya’s poor physical condition for the fight, as far as I can tell, seems to be the sole reason for the defeat. You could see it by looking at him that he didn’t look enough to spar, let alone fight against a small, fast fighter like Pacquiao.

If De La Hoya gets back in training with Mayweather, he’ll be able to pick up the pieces of his career and move on from this defeat. My hope is that Pacquiao gives him a rematch so that he can prove that the loss was a fluke due to his poor conditioning and not because of him being shot.

Believe me, no fighter loses their ability over seven months, which is exactly how much time that had elapsed since De La Hoya had last fought against Steve Forbes. I doubt that Pacquiao will ever fight him again, however, but at least by offering to give Pacquiao another fight, De La Hoya would show that he’s man enough to get back in the ring after such a bad beating.

It doesn’t matter if he fights him again, because De La Hoya can move on to better fighters than Pacquiao, like Miguel Cotto, and redeem himself in the ring.

However, the first thing that De La Hoya needs to do is get Mayweather Sr. back as his trainer so that he can get back his mentor and guide, because he clearly was missing his expertise against Pacquiao on Saturday.

The next thing that De La Hoya needs to do is scrap all his crazy dieting schemes and start eating healthy again, meaning red meat, and tacos, whatever. He can’t be eating just vegetables and tuna if he wants to get his strength back.

Once De La Hoya gets his strength back, he needs to call out Pacquiao and challenge him to a rematch. If that doesn’t happen, then by all means he needs to go after the best fighters in the welterweight and light middleweight division.

I think he’d do well to take on Vernon Forrest and light middleweight. That would be a good fight for De La Hoya to get his confidence back. After that, he should look at a fight against a top welterweight, like Cotto or Antonio Margarito, but the weight needs to be at light middleweight so that De La Hoya doesn’t have to starve himself again like he did against Pacquiao. De La Hoya needs to get back the eye of the Tiger, because that wasn’t the real Oscar on Saturday night.

« Floyd Mayweather vs. The Winner of ‘The Hitman’ vs ‘Pac Man’