Ricky Hatton: How Does The Future Look For Him? 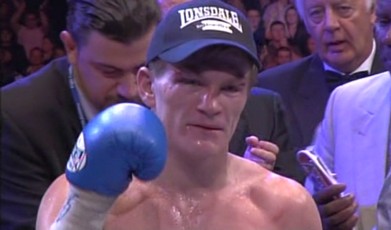 By Jonathan Watkins: On December 10th 2007, a bruised and beaten Mancunian lay motionless on the canvas of the MGM Grand in Las Vegas. When Ricky Hatton squared up against Floyd Mayweather on that winter night, both fighters knew the long-term repercussions of a loss were going to be career changing. In the end it was Hatton’s reputation that took a turn for the worse.

By agreeing to the match-up both Hatton and Mayweather put their undefeated records on the line. As the media would publicize, somebody’s 0 had to go. For Ricky Hatton, the thought of toppling the top pound-for-pound fighter in the world was too tempting to resist. Along with keeping an unbeaten record, the future prospects if he won were to be lucrative.

However reality and predictability won in a 10thround knockout. Instead of a victory opening doors to more epic contests, Mayweather’s domination over Hatton has meant the journey of his career taking a new turn. After the December fight and an unconvincing points victory over Juan Lazcano, Hatton is now squaring up against Paulie Malignaggi on November22nd, once again in the MGM Grand.

The question on every boxing fans mind is, what this fight going to prove? With plenty of worthy light-welterweight opponents lining up for a shot at Hatton, he has chosen Malignaggi. Despite a brave performance against Miguel Cotto, the New York fighter is yet to prove himself to be in the same league as the Hitman, and was previously just an undercard on Hatton’s homecoming victory over Juan Lazcano. With Malignaggi delivering only five knockouts in 26 bouts, there doesn’t seem to be too much danger coming Hatton’s way, this fight looks to be as predictable as if Hatton were to participate in a welterweight rematch against Mayweather.

Some perceive that Hatton has opted for a safe route towards retirement; with critics believing that the likes of Junior Witter, Timothy Bradley and Ricardo Torres in the light-welterweight division may provide a more entertaining and challenging fight.

There is no doubt that Hatton is a well sought after boxer, although the reasons behind his value to promoters are now a matter of debate. The Hitman’s fighting credentials seem to have been taken over by his ability to attract a full capacity crowd along with substantial box office ratings, due to his popularity with the British public.

But let’s not write him off; remaining the undisputed king of the light-welterweight division, Hatton cannot be over-looked to still stand toe-to-toe with the best. The Malignaggi fight could just be the stepping-stone in the revitalization of Hatton’s career. With established fighters such as Manny Pacquiao and Oscar De La Hoya in line for what could be Hatton’s final fight, these two potential super fights could redefine Hatton’s career.

After all where is the shame in losing to Floyd Mayweather when fighting in an unfamiliar weight division? Oscar De La Hoya lost and is still considered one of the greatest boxers of all time.

Despite criticisms that Hatton is but a shadow of his former self, and the constant disapproval of his lifestyle outside of training, Hatton has still only been defeated once. The bout against Malignaggi on November 22nd will certainly answer more questions about his future. This could be Hatton’s penultimate fight, with one more epic contest likely to come. His infamous battle with Kostya Tszyu could soon be replaced as his defining moment, by a remarkable final super fight. Maybe we should take the view that the Hitman is easing his way back into form by facing Lazcano and Malignaggi, in order to prepare himself for a grand finale and a dignifying exit from professional boxing.

« De La Hoya Turns To Mora After Pacquiao Walks Away